Julie Gayet: Close Up On Her Life As A Mother 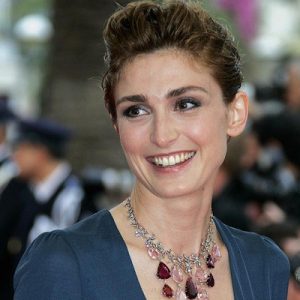 Since the photos published in Closer evoking a possible relationship between Julie Gayet and President Francois Hollande, the actress is more than ever under the fire of the media. In October 2012, Julie Gayet was the godmother of “My First Festival”, an event dedicated to children’s cinema. On this occasion, she had confided on her family life and her two boys Tadeo, 13, and Ezekiel, 11 years old at the time.

Why did you accept the role of godmother of My First Festival?
I only work at the stroke of heart and this festival is really one. I love this concept where, during the holidays of All Saints, we can take his children to see films adapted to their ages, in lots of arts and essays rooms throughout Paris. And in addition, there is plenty of entertainment around movies, workshops, meetings and debates … I came to the festival when it was created and I loved it. So I did not ask myself when I was asked to be the godmother of the eighth edition!

Little, what were your favorite movies?
I went to the movies once a month with my parents. We had a ritual: we went to a bookstore to buy a comic then, then, it was the cinema session. I was a big fan of Disney even though I was very emotional about cartoons. My mother told me that she had to leave the room for Bambi so much I was crying! A little bigger, I loved the King and the Bird, Donkey Skin, Beauty and the Beast, Princess Bride … Very different movies finally.

And today, what kinds of movies are you going to see with your two boys?

I take them a lot to the cinema. At home, we do not have a television so they have to go to the movies or watch DVDs to see movies. From an early age, I showed them movies that touched me. Around 4 years old, they saw Chaplin’s Kid and cried all the tears of their body … Today, even if they are a pre-teen, I continue to accompany them to the cinema because I like the discussions that we can have together with the movie. Sometimes they choose the film, and sometimes it’s me. Last summer, we went to see Sexy Dance and Wind in my calves. You can guess who I chose … But, in the end, they liked both films, proof that we can have very eclectic tastes!

Will they see your movies?

I do not force them! If they want to see movies, they go there. But it’s never me who accompanies them! This year, for example, they went to see Philippe Lellouche’s “Les plus belles vacances” and they loved it. But it’s true that I did little

of films for young audiences. Moreover, a few years ago, I made a TV movie for them so that they better understand my job. It was “The legend of the three keys”. I took them on the set, they saw the process of making a film and then the result on the screen.

Yes and no. I try to be a chicken mother and strict at the same time. I am uncompromising on “hello”, “thank you”, “goodbye”, “do not throw paper on the floor” or “put dirty dishes in the dishwasher”. For the outings, I want to know where they are, what they do … But, beside that, I do not want to be an invading mother at all. When they are at their father’s house (the writer Santiago Amigorena, ed) or on vacation, I do not call them every day. I let them live! I do not want them to feel guilty about being far away.

The 8th edition of the children’s film festival will take place from October 31 to November 6 in Paris, during the holidays of All Saints. Julie Gayet will present her 3 favorite films: Tokyo Godfathers, Princess Bride and the Pierre and Wolf movie-concert. Many other films and cartoons will be offered to young audiences at a rate of 4 euros per session.

Find the complete program on www.monpremierfestival.org

The father of your sons is Argentinian. Have they grown up in this double culture?

Yes, completely! Moreover, today, when we look at football, they are thoroughly for the Argentina team and do not support France at all!
Joking aside, they really grew up with both languages and both cultures. They speak Spanish fluently, it was really important to me. I even hired a South American nanny who did not speak a word of French to force them to practice. And of course, their father speaks to them in Spanish. I also find it unfortunate that in the French school system, foreign languages are not taught in kindergarten. At this age, children learn very quickly and it is such an asset to speak several languages!

Where do the first names of your sons come from?

These are two Argentine names. Tadeo means “the lovable, the lover” and I find it very pretty. And it’s also the name of the two grandfathers of Borgès, one of my favorite authors. As for Ezekiel, it’s actually the first name that their father had to wear. But when he was born, his own father changed his mind by going to declare him and finally called him Santiago. We caught up with the story somehow! It was important to me that first names make sense.

How did you manage to reconcile your career and your family life?

I always left my job behind the door of the house. When I come home at night, I do not want to impose my fatigue or stress on my children. I never talked to them much about my job in order to preserve them. In the end, everything is a question of organization. When they were very young, I took them on the set, and when they started going to school, I would have them guarded if I had to be away for several days. Besides my mother is absolutely great, I have a crazy chance to count on her to keep my son! But I have also refused to shoot abroad so as not to be far too long. However, I can not say that my children have been a brake on my career, on the contrary. My life enriches my job and vice versa. I am lucky to be able to live from my passion and I can not imagine myself being a stay-at-home mother and picking up my children every day at 4.30pm when I leave school. My job allows me to be good in my head and therefore to be good in my life. It’s a balance to find.